Vilcabamba – The Valley of Longevity

Between the early 70s and late 80s specific ethnic groups such as the Tarahumara in Mexico, the Caucasus in Georgia and the Huma in Pakistan earned the interest of longevity researchers around the world since higher than average percentages of these peoples were reportedly living into their 90s, 100’s and more.

Intense study of their lifestyles and surroundings followed. Some interesting similarities were found even though some of these groups lived half a world away from each other:

One of the communities most frequented by international longevity researchers is the small village of Vilcabamba (pop. 1500) in southern Ecuador about one hundred kilometres north of the Peruvian border.

As a fitting 40th birthday gift I decided to visit Vilcabamba to see if I could glean any information about aging and longevity. Did people indeed live longer there and if so why?

After a nine-hour flight from Toronto, an hour small plane flight from the capital Quito, a two hour car ride and a small taxi jaunt you arrive through twisting, lush greenery lined roads to find the so called, ‘Valley of Longevity’ to be truly magnificent.

The first thing that strikes you is the sheer physical beauty of the place. It is visually stunning lying in a fertile valley nestled in ever widening and heightening circles of surrounding Andean mountains. But the sensory stimulation you feel there goes well beyond the visual: the air, the quiet, the temperature, the sunlight and the truly tranquil atmosphere envelope you in a feeling of surprisingly moving peacefulness of body and mind. 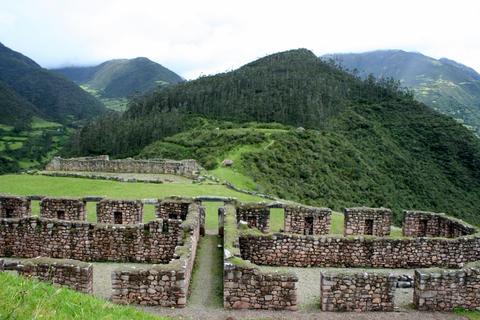 Vilcabamba lies adjacent to Podocarpus national park, an extremely eco-diverse mountainous region where many plant and insect species exist which remain uncatalogued by the scientific community today. This explains Vilcabamba’s incredible lush and abundant greenery with a plethora of beautiful wildflowers and birds.

The Amazon basin, the so-called ‘air filter’ of the world, directly borders Podocarpus Park and Vilcabamba. In fact Vilcabamba is one of the first bits of civilization the purified Amazonian air hits on its journey from the Atlantic westward to the Pacific Ocean. The result is truly magnificent air, startlingly fresh, fragrant and invigorating. I found myself continuously taking deep breaths as if I was in an aromatherapy session.

Then there’s the climate: it’s perfect! Vilcabamba lies at 1500 metres above sea level it is surprisingly cool for its proximity to the equator (4 degrees south). All year round temperatures fluctuate between 23 Celsius in the day and 15 at night with very little humidity. According to the locals the sparse rainy season isn’t really an issue.

The Vilcabamban water is also noteworthy. Scientists have found high concentrations of 21 minerals and speculate this may help explain the total lack of cardiovascular disease and extremely low level of osteoporosis found here. Vilcabamba’s 1500 metre elevation allows an optimal amount of mineral filtration as the waters descend from their 3000 metre start in the Andes. By the time this same water reaches sea level mineral levels are markedly lower. And yes it tastes good too.

It really is easy to ‘just be’ in Vilcabamba. No internet, few phones and only one through road to the world make life here truly quiet and peaceful. Time is not the same in such an environment. I couldn’t find anyone who wore a watch. Most of the villagers I met used the sun’s position in the sky for time.

The incredibly relaxed pace of the place is so effortless and intoxicating you could swear your body was made for it. I watched people come to the small town square and just hang around for hours at a time. In contrast to life in the big city Vilcabamba is in serious slow motion. Many an afternoon is spent in a healthy mix of working and socializing for hours at a time. They talk a bit, then walk over to someone they know, which is basically everyone, then talk some more.

In investigating claims for longevity it right away becomes apparent that there’s no way to know for sure how old someone is. Because old people are venerated in Vilcabamba, people commonly exaggerate their age. There were however a few people who the townsfolk and Ecuadorian authorities agree really were as old as they claimed. The oldest reportedly being the well-known Miguel Carpio, who died in 1978, at the age of 130! It is noteworthy that world gerentological authorities refuse to consider these claims because they can’t substantiate them (the oldest verified people being 117 and 122 from France).

In my search for the current elderly in Vilcabamba I met a reasonably healthy 107 year-old man who stopped smoking five years ago but continues to drink daily. His diet consists mainly of squash and beans. Although his hearing and sight were weak he certainly could talk up a storm and seemed in good spirits. In marked contrast to our society the elderly here never ‘retire’. They simply shift what they do to less physically demanding tasks such as sorting corn or watching infants but they remain a valued resource. Retire at 65? These people work until the day they die.

I couldn’t help but wonder if we weren’t losing out on a potentially valuable pool of wisdom and labour by removing our elderly from everyday work life. In Vilcabamba the elderly are a familial source of pride. They are considered as living testament to the wisdom and strength of the families they came from. Contrast this mindset with the expectations we’ve created in North America in our elderly about aging. (The field of Mind-Body medicine would have a field day with the implications: just how powerful a factor in longevity would being revered for your age be? Could this mindset foster cellular processes that enhance tissue life?)

I was very impressed by a delightfully virile 96 year old lady I met. She stood straight as a rod, walked with a fluid grace I would never have associated with someone over fifty and worked 8-10 hours a day helping her family farm. She was without a doubt the healthiest 96 year old I’ve ever seen and it should be noted was a valued contributor to her family. This was all great but we all know people right here in Canada who live to be productive well into their 90’s. Where were the really old people, the 120 year old legends I’d heard about?

It seems that the golden age of longevity had in fact ended about fifteen or twenty years ago in Vilcabamba. Hospital staff, the town doctor and an American expat who’d lived there for 33 years all remarked that the ‘modernization’ of Vilcabamba that began with the arrival of processed foods, cars and tourists, had effectively changed life and dramatically decreased the number of people living to really old age.

Whereas everyone had grown their own food before, now many were buying their food and introducing processed foods to the Vilcabamban diet. Cars and trucks transported farmers whereas previously 5-10 km hikes through the mountain valley used to be the start of every farmer’s day. Tourism had made some people wealthier than others causing competition and stress.

A hospital was donated by Japan in ‘75 and interestingly many of the locals believe the drug treatments dispensed by the hospital were particularly hard on the elderly who had never used pharmaceuticals. Until the hospital was built locals relied completely on natural cures from surrounding mountain and jungle plants. Now almost no one performs the arduous labour of picking and preparing natural cures. Pills are just so much easier to use.

So what do we learn from all this? A combination of pure air, vigorous daily exercise, mainly vegetarian low caloric diet, cultural respect for the elderly, great climate, semi-mountainous habitat, highly mineralized water, low stress with little time concerns and daily community based socializing is really good for people. The magic seems to leave however when ‘modernization’ arrives: cars, processed foods, hospitals, higher productivity requirements necessitating time constraints and stress.

The bigger question Vilcabamba raised for me is why we in the modern world think we need to be so productive in the first place? Who really gains when we work ourselves to exhaustion?

Come to think of it I don’t remember seeing any tired people in Vilcabamba.